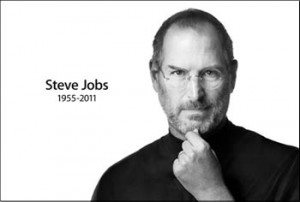 Steve Jobs died today. Like hundreds of millions of people around the world, I owe him a great debt. Apple, the company that Jobs created, was forced to leave, and later rescued from near bankruptcy, has produced an amazing array of products that have changed our daily lives. Under his leadership Apple has become the most successful company on earth. Hopefully they will go on creating brilliant and innovative products for a long time to come. Undoubtedly, that’s what Jobs wanted.

In the summer of 1999 I had the great pleasure of meeting Steve Jobs. I was supervising a photo shoot for a story Newsweek was doing about his latest baby, the first iBook laptop. I really didn’t know what to expect. I had heard about how demanding and temperamental Jobs could be. In the two weeks leading up to that day, I had encountered Apple’s fiercely protective PR department. I was told we could photograph Jobs in New York, but we had to choose from a short list of portrait photographers he liked. We chose the very capable and creative Moshe Brakha, a savvy Israeli-born photographer who had a knack not only for portraiture, but also for handling temperamental celebrities.

Jobs arrived right on time. He was accompanied by his very smart and lovely Communications Director, Katie Cotton, and her assistant. We had set out a nice spread of healthy snacks, since we knew Jobs was a health-conscious vegetarian, but they had just come from a late lunch, so he took only a bottle of spring water. I must say, he was charming and in very good humor. (Except when one of the photographer’s assistants started lighting up a cigarette. Jobs angrily insisted the smoker go outside. He said both his parents had died from lung cancer, so he had no tolerance for smoking, understandably).

While we were waiting for the photographer and his assistants to finish setting up the lighting, Jobs proudly showed me the new laptop. It was shaped like a clam shell and had a plastic white cover with a “blueberry” aqua or “tangerine” orange trim.  I mentioned that I had a small side business fixing people’s computers and that I was a big fan of Macs. I asked him where the reset button was on the new laptop, as I couldn’t find it. In working on the early iMacs, with the old Mac OS 8 and 9 operating systems, I had to press that button many times.  He looked and looked and had to admit that he couldn’t find it either. He said hopefully the new iBook was so well designed it wouldn’t need a reset button. (I did find the button much later).

With his signature great enthusiasm and excitement, Jobs showed me how the keyboard could be lifted off by the user, so they could easily install the optional Apple Airport card for wireless Internet access. It’s easy to forget, but in 1999, Wi-Fi capability was just beginning to be a standard option on laptops.

Jobs pointed out how very clean the internal design was – no awkward cables, no clutter. I said, trying to sound as smart as possible, “Oh, it’s kind of like a restaurant where you can see right into the kitchen, so they have to keep it impeccably clean”. To my delight, Jobs said that was a great analogy – that it was exactly like that.

Like many charismatic figures, Jobs could quickly make you feel that you were very special.  A friend of mine I told about meeting Jobs said I should get ready for a phone call asking me to come to Cupertino and join the Apple team. I have to admit, for a week or so afterwards I was hoping that phone call would come. Evidently Steve didn’t think Apple was in great need of a photo editor who could repair Macs. Fortunately, I didn’t quit my day job.

Farewell, Steve Jobs. Rest in peace and Godspeed. The world is a better, more elegant, and much more fun place thanks to you.

I am often asked for help from clients who are trying to decide whether their next computer should be a laptop or a desktop. It’s usually someone who has always had a desktop computer and is thinking of switching to a laptop. Laptops are great. They vary in capabilities from very basic to pretty much as advanced as any desktop. Of course, there are some compromises for the smaller, lighter form factor. Battery life has improved a lot over the past few years, but that’s only relevant when you are using it away from your desk. If you are thinking of switching to a laptop from a desktop, here are some of the pros and cons:

Lightweight, compact footprint, lower power usage, portability, easy to take to a store for service. Easy to fit in any room, or take from room to room.

While you are at it, look at the new Macs. They are gorgeous, and you can run both Mac and Windows 7 on them easily, using the program Parallels 7. I am writing this from within Outlook 2007 for Windows, inside the Windows 7 environment, on a Mac Pro desktop computer.

Your biggest choices are between a big screen that’s easy on the eyes but heavier, or a smaller screen that’s in a lighter laptop. The best thing is to go to a store that sells Dell (like Best Buy) and hold different models in your hands, see what the screen looks like to your eyes, and type on the keyboard. Also check out the Macs at any Apple Store.